Living with a computery person has some perks. He’s always upgrading his computers, which means I get all his “old” computer bits which are still better than what I had. If I ever have any issue then I know he will be able to fix it. I have even started learning a few things from him talking about computer stuff all the time! This proves I listen to him when he talks, doesn’t it?

At the moment I am using my tiny little computer, Boxxy. When I first got her I was amazed at how small she was. Here she is: 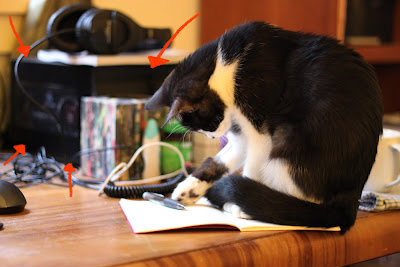 See? Tiny! She’s been my box for almost a year now, so I have grown attached to her a bit. We tried to change her insides to a different case, but it mysteriously wouldn’t work so we chucked everything back. Except now she has some sort of ghost inside her making my life difficult. Sometimes she doesn’t turn on properly, other times my second HDD stops registering as there so I have to fiddle with cords. For a while I had to leave her on top  of my desk because if I put her under the desk and turned her off she wouldn’t turn back on. In all of this we had to reformat her and reinstall everything from a backup, which meant I lost a few things. One of which was photoshop. Oh how I have missed photoshop. I had a different photo editing thing I have been using in the interim but it’s just not the same. So we finally reinstalled that shit last night and I drew a picture to celebrate. 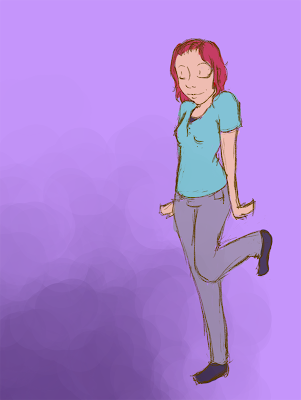 It is me doing the “hurray I have photoshop!” dance. It’s been so long since I’ve used my tablet that I have forgotten how to do a lot of stuff, but hopefully I will get back into the habit of using it again.