I have a bad habit of moving onto something new in the middle of a project because I either get bored, or find something different that I can’t be bothered waiting to start. This can end up causing an overwhelming number of half-done projects and me feeling like I have nothing to do. I decided that I had to crack down on my WIPs, and found the Star Blanket I had started ages ago. 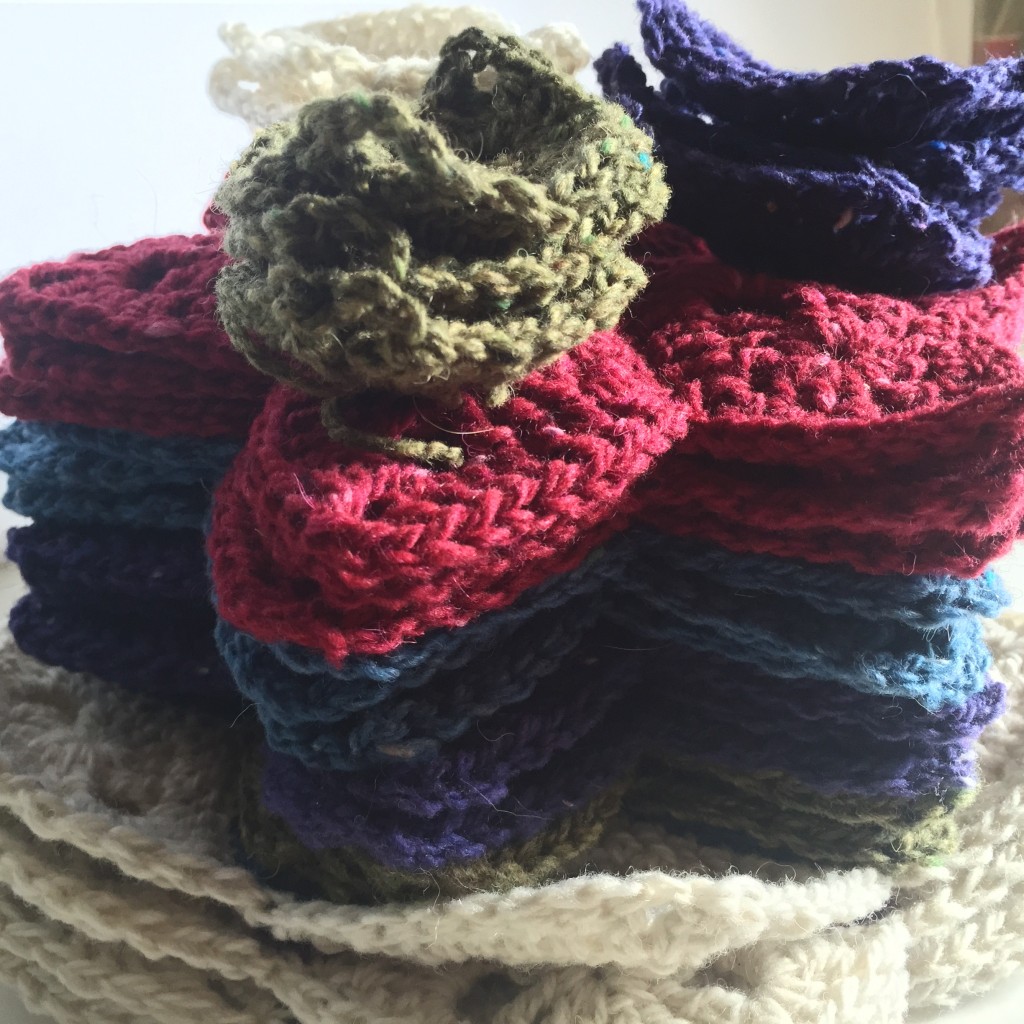 Now I saw the original pattern on Tumblr and it looked awesome, so I went and grabbed stuff without realising how much work there would be. You make 6 small diamonds, sew them together to make a star. Make 6 more diamonds in your background colour, and sew them in between the points of the star. Then sew all these bits together to make the blanket. that is a lot of sewing right there. I have trouble sewing granny squares together and they are self-contained pieces! It’s no wonder I moved on to something else instead of finishing it. 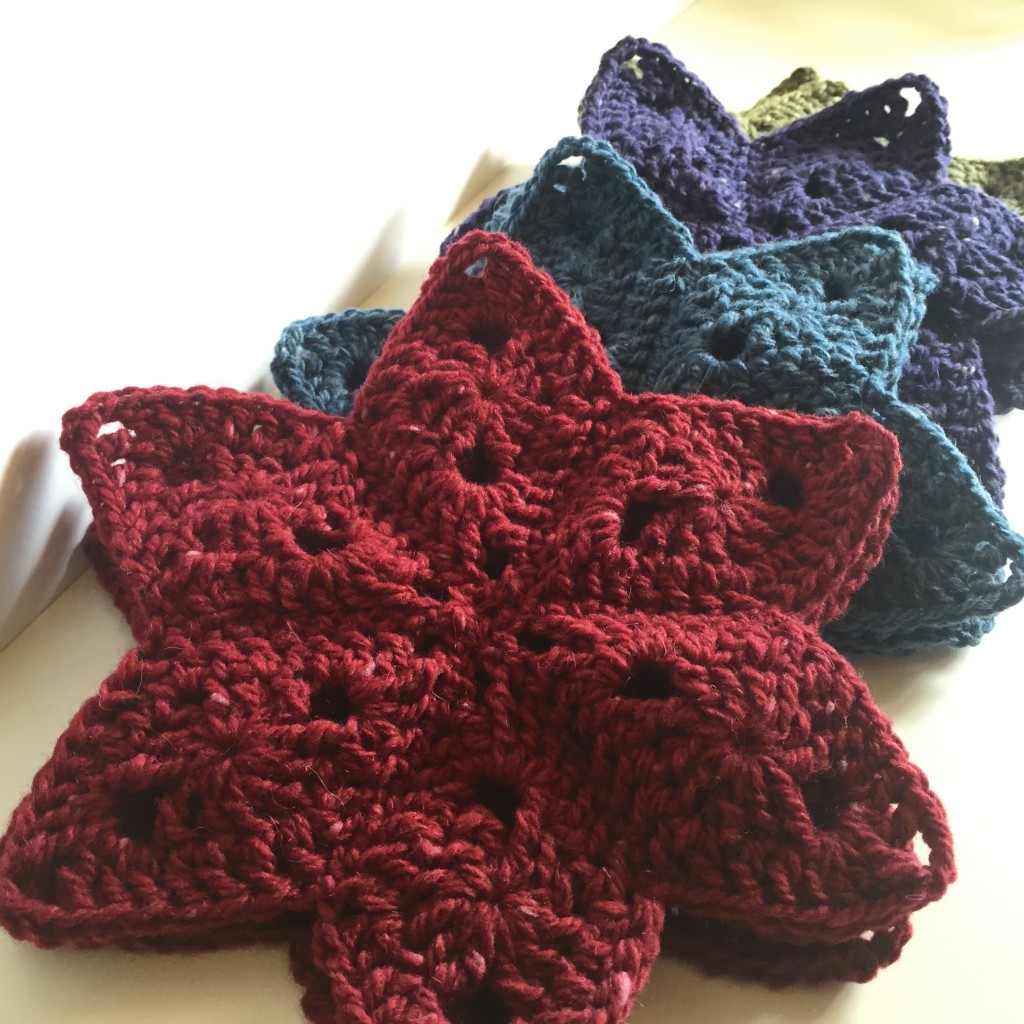 The stars do look good when they are sewn together, though. It will look good when it’s finished but there’s just so. Much. Sewing. The most frustrating thing about it is that since deciding I was going to work on it, I have now run out of yarn, so I need to buy more before I can do any more. Who wants to bet I move on to something else while waiting for the yarn? 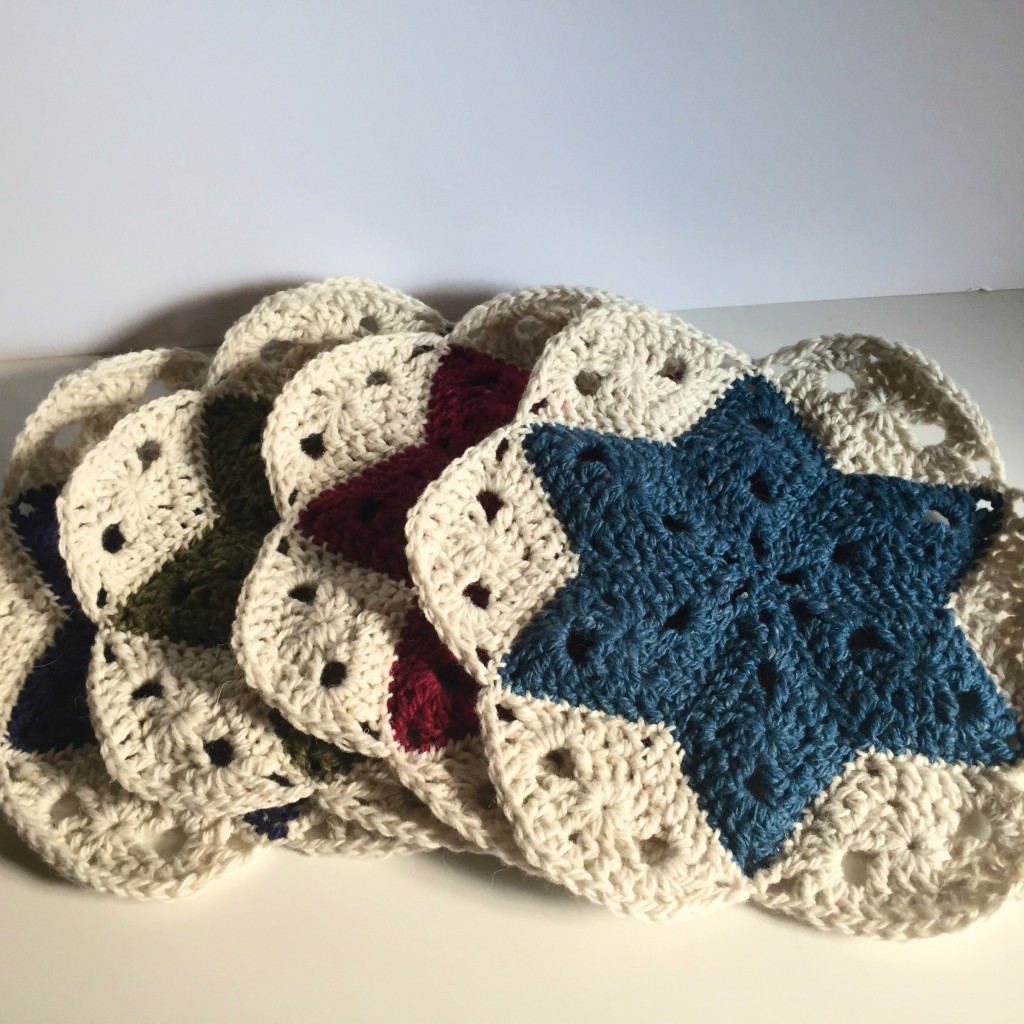 When I joined the gym I had three goals. 1) To get fit enough to be able to run for a train and not feel like I was dying; 2) To lose enough weight that I didn’t need to go through the horror of shopping for new jeans; and 3) to get strong enough that I could make gun show jokes while flexing. I am a mature adult with serious health goals, ok? My personal Trainer, Matt, found them amusing but ultimately good goals to try and achieve and wrote them down in a much more professional way, I’m sure.

So it’s been almost a year of going to the gym at least once a week, and so far I haven’t achieved any of these goals. I still feel like I’m going to have a heart attack when I run to get a train. I have little muscles that only I can see or care about. I have discovered that men’s jeans are much more comfortable than women’s jeans. And I realised recently while hobbling around like an old lady after a gym session, that I don’t really care that much.

Don’t get me wrong, I still hate going to the gym. I don’t think I’m ever going to be the kind of person who doesn’t grumble and complain and try and get out of going and exercising whenever I have to go. I will always eat sugary things if they are offered. I’m not going to become a fitspo/paleo/crossfit drone. Don’t expect me to start showing off an amazing recipe for quinoa oatmeal that I swear by. I just have come to terms with the fact that even if I do hit those goals I probably never really enjoy going to the gym.

But that’s part of life, really. There are so many things that I have to do on a day-to-day basis that I don’t want to, why would going to the gym be any different? I get up and go to work, I pay bills, I eat proper food, going to the gym is just another entry on my list of Adult Responsibilities (as much as I wish it wasn’t).

I’m hoping that this change in mindset when it comes to exercise helps me to go to the gym on days that aren’t when I have a session with Matt and ultimately help me to hit those goals I made. Baby steps though.

While I love my cats, there are times when I wish we could have more pets – like when I saw a Scotty Dog at the vet clinic and fell in love – but Ben and I have decided that our cats are enough work as it is without added another animal to the mix. Plus being renters it would be even harder to get approved with 3 animals than it already is with 2 animals. So for the moment I get to squeal with excitement when I see puppies in the street and try and pat them without the owner noticing.

To try and make me feel better I decided to come up with a shortlist of the top 5 kinds of dogs I would like to own. If we were in a perfect world where trendy dogs weren’t ridiculously expensive, or dog breeding didn’t result in awful health issues for the animal, or puppy farms didn’t exist, I would definitely go for at least one of these 5 breeds. Please note that these are in no particular order, because I doubt I could rank them and would have all of them if I could. Imagine all of them wearing a bandanna as well, because bandannas make all dogs measurably more awesome. 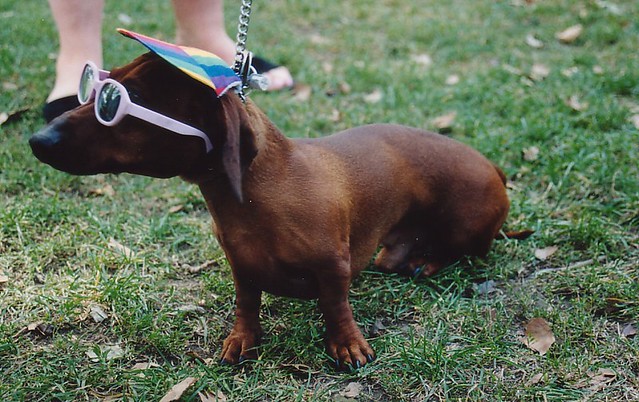 This is a no-brainer. I mean, look at how cool that dachshund looks right there; who wouldn’t want one of those? I want to have one and give it a little turtleneck sweater and just cuddle it while it tries to wriggle away. Can you imagine how hilarious it would be if it and Ned chased each other through the house? Or if I got them both walking on harnesses and taking them down the street? So Cute! Plus look at this anatomy diagram. Isn’t this a perfect description of a Dachshund? The day I saw the Scotty Dog at the vet I also ended up walking behind a couple with a French Bulldog puppy. I almost tried to steal it, because it was so excited to be out and sniffing things and lolloping around that I felt like my life would be incomplete without it. I mean, look at the dog in that photo there, doesn’t he look so happy to be running around? I feel like a little dog would suit me better, so we can be stumpy little chubby buddies together. 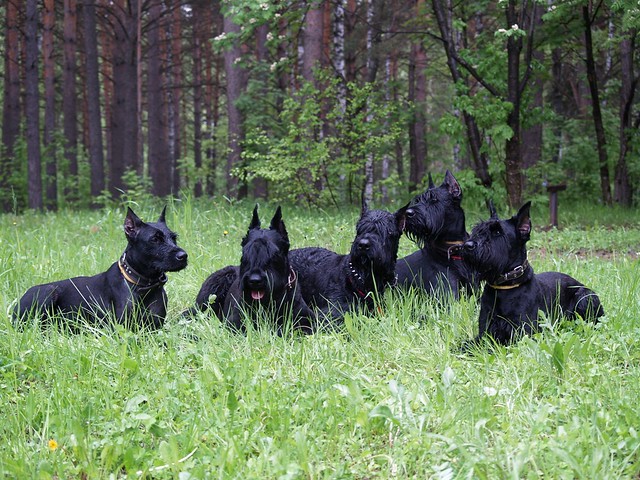 One of my memories from when I was a kid was that my Aunt and Uncle had Giant Schnauzers as pets. I was quite a tiny child, so these massive dogs were terrifying. Now that I am not a tiny child I have realised that I would really like one of these please. The black ones make me think of giant Scotty Dogs (I mean, look at the ones in that photo with the long fringes) so I would definitely go for one of those. 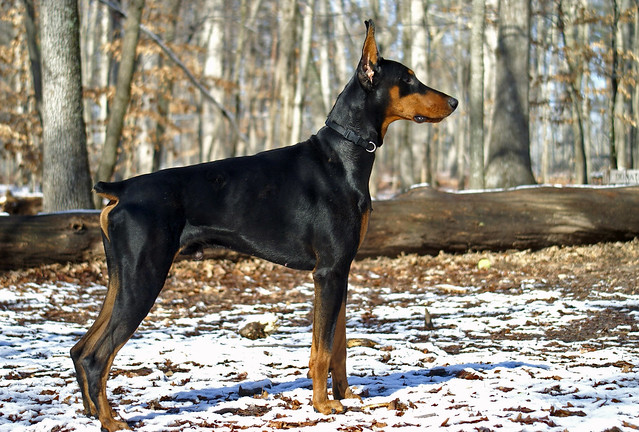 I tend to alternate between wanting a tiny little dogs and a big intimidating one. Since I was young I always loved Rottweilers, German Shepherds and Dobermen, so I feel like I needed to have at least one of those on my list. Because a Doberman has the connotation of security dogs and that they’re ‘dangerous’, I would love to have one, train it properly, and just watch as people wonder how I can handle such a large dog. We would have matching resting bitch faces. I would never get approached by Charity Spruikers! I can only see positives here! 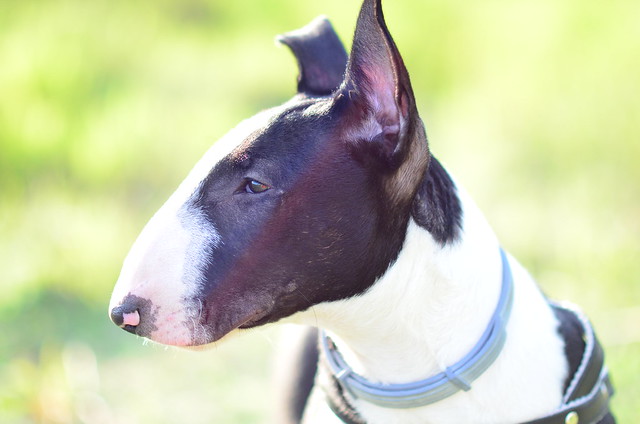 I had to find out what this breed was by googling “Shark Dog” – Bull Terrier was one of the related image searches. I used to not like these dogs, because of the sharky resemblance, but they have grown on me over the years. They’re another breed of dog that look scarier than they actually are (if you treat them well and train them properly, of course) so I feel like they would add to my intimidation technique when it comes to pushy people on the street. Plus they are smaller than a Doberman or a Giant Schnauzer, so that means less food, and less trendy than a Dachshund or a French Bulldog, so probably cheaper as well.

I feel like the Bull terrier is the winner here, so now all I have to do is try and convince Ben that we need one. Time to collect cute Bull Terrier photos…

I realised recently that I have now added three more blankets to my collection, bringing it up to a total of five. I know blankets take a long time to finish and get bulky and annoying, but I can’t help myself. I think it’s because I’m always cold that I feel the need to have warm snuggly blankets on hand at all times.

My problem then is that the cats also like snuggly blankets and lay on them, covering them with cat hair. And cat hair doesn’t really help when I’m trying to curl up in the blanket, as the hair tickles my face and nose constantly. This means I am now trying to work out where I can store my blanket stash so that they don’t get taken over by cats. So that means putting the blankets in a certain part of a certain cupboard where I know the cats can’t get into. At least these ones should look nice for a little while longer.

END_OF_DOCUMENT_TOKEN_TO_BE_REPLACED

Out of the two cats Scout is the nervous one. She runs and hides whenever someone comes to the door (which is a good way to tell when the delivery guy has arrived), wanders through the house meowing when she can’t see us immediately, she even puffs up and growls at Ned on occasion, even though they spend 90% of their time in close proximity. If anyone was going to get a condition that is generally related to stress it would be Scout.

Instead it’s Ned. Silly purring bouncy Ned, who doesn’t understand when other cats are angry at him. He’s the one who has been having to go to the vet lately. END_OF_DOCUMENT_TOKEN_TO_BE_REPLACED