I may have gotten a little obsessed with Rob Cantor’s live version of “Shia LeBeouf”, a story about the actual cannibal Shia LeBeouf. I have definitely sent it around to people in my office who I think will enjoy it and the responses have basically been as positive as mine was when I first saw it. I had heard the song on my travels through tumblr, but thought nothing of it until I saw the video linked above. I feel like the performance really adds an added level of awesomeness to the song.

This made me look into some of Rob Cantor’s other songs, and he’s pretty dang talented!

END_OF_DOCUMENT_TOKEN_TO_BE_REPLACED

Crocheting at work is looked down upon by my manager and the other bosses, but I still needed something to pass the time and keep my hands busy, so I turned to modular origami. This way I will be making something, but it will use up more paper so I don’t have a giant pile of origami things on my desk looking like I have been slacking off. I have a box of origami cranes that look messy and like I haven’t been doing work, but people don’t seem to realise how much effort goes into one of these balls so I can get away with it a bit more easily.

END_OF_DOCUMENT_TOKEN_TO_BE_REPLACED

Recently I discovered, on a fateful Friday morning, that I had lost my wallet the night before. I found this out when I got to the train station and when to pay for my train ticket and my wallet wasn’t in my bag. Nor was it anywhere at home. Or at the pub I had been at, and none of the taxi companies had it. I waited about a week, but by then I was resigned to the fact I had very little to no chance of getting it back so I might at well properly cancel my cards and get replacements. If you’ve never had to replace the entire contents of your wallet let me tell you, it really sucks. Like, I would be less annoyed if I lost my phone, because then I’d only really have to go through the bullshit of replacing one thing; everything of importance in my wallet has its own annoying process to replace, and now I get to update all my direct debit payments to a new card and try and remember a new card number. There are still things I haven’t gotten around to replacing yet because getting a new photo ID and bank cards was frustrating enough.

END_OF_DOCUMENT_TOKEN_TO_BE_REPLACED

Far East Mention Mannequins (who shall be referred to as FEMM from now on because that is a ridiculous name) are a Japanese duo I have been listening to a lot lately, and it has gotten to the point that I put a song on repeat for a few hours before changing to another one. I am even listening to them while writing this post. It seems appropriate. Now you may think they’re just another weird Japanese electropop band, but they are so much weirder than that.

The premise behind FEMM is that two mannequins, RiRi and LuLa, were saved and got a device implanted into them to make them, uh, alive. So now they are using music to try and create mannequin awareness so that mannequins are treated better. Because RiRi and LuLa can’t talk (even though they can sing?) any interviews are done by their ‘Agents’, Honey-B and W-Trouble. These two ladies are rappers who have been featured in one of FEMM’s songs, and Honey-B seems to do all the social media stuff, going off the facebook and youtube comments.

I found out about them through tumblr, when someone I followed posted one of their videos. Apparently FEMM has gotten some attention recently with their song ‘Fxxk Boys Get Money’, where they are dressed in latex maid outfits and twerking. It’s not really my jam, the vocals are a bit too grating and the twerking kinda puts me off. The point of the song is pretty great though, which is pretty much “yeah boys are ok but I would prefer money to buy stuff”. They seem pretty big on ‘girl power’ type themes in their songs, which I definitely appreciate.

‘Dead Wrong’ is definitely my favourite of their songs so far (I haven’t listened to all the songs they’ve released, because Dead Wrong is so catchy in it’s autotuned glory) but coming 2nd is ‘Wannabe’, which is how I found about FEMM in the first place. The whole thing is a bit bizarre, with two ladies dressed in latex Japanese schoolgirl outfits, singing with deadpan expressions on their faces.But I think that’s part of why I like it.

Ben and I were talking about this and talking about how the mannequins can be seen as a reference to how pop stars put forward a persona, and how RiRi and LuLa are essentially singing dolls while Honey-B and W-Trouble are the ones talking for them, like Agencies do for musicians these days (especially in countries like Japan and Korea where pop music is such a big industry). The more I think about it the more layers I can find, like having FEMM wear the latex outfits could be referring to the fetishism of public figures like pop stars. Obviously we won’t know if this is all intentional and it’s a very complex message, or if we are reading too far into this. We’re not the people behind FEMM, I also haven’t looked that deeply into them as there’s probably a bunch of stuff in Japanese that I can’t read that may or may not even clear things up.

Either way they’re super catchy, have pretty positive messages in their songs, and I may have been obsessing about their songs for a while. I have been listening to them pretty constantly, and I think the main reason I like them so much is that the music sounds like the soundtrack to some sort of Magical Girl Anime fight scene.  Check them out, maybe you’ll like them, maybe you won’t! Either way it’s fun to try out new things!

I found out about Knitcrate when I was at my brother’s birthday lunch. His friend, Ben, is into crafty stuff like quilting and knitting, so he mentioned it when mum told him I did crochet. Knitcrate sends subscribers a package of yarn every month (or every 2 months, depending on the subscription), and things like starter kits which come with a pattern and the needles needed. Because I would be doing crochet rather than knitting I went for the 10 mini skeins every month, rather than one of the kits. I got my first one not too long ago, so I wanted to talk about it!

It came in a pretty red padded envelope, all the way from America! It came with 10 mini skeins of sock yarn, hand dyed in some pretty colours. It’s from Drew Emborsky’s Gemstone range, which is 90% merino and 10% nylon, and it so ridiculously soft – I couldn’t stop touching them during the day. I don’t have the Diamond, Amethyst or Onyx colourways, but the other ten were the in the pack sent to me, and there is a good mix of colours. Pearl and Opal are a bit boring because they have much more subtle variations in the colours than the others (I can’t even really see the variation in Pearl, it just looks cream to me) but they will probably be a good way to break up the other brighter colours. 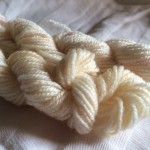 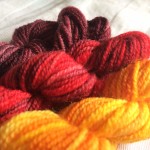 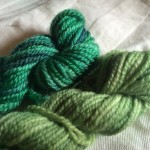 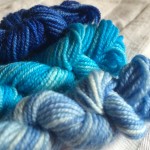 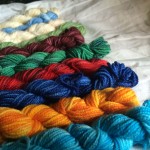 I’m planning on using this pattern to make a blanket, but seeing the pattern is written using thicker yarn it means, the hexagons I make will be smaller and I’ll need more of them. Sigh. It will be a good way to use the yarn I get from the different Knitcrates I get each month , though. Plus it looks pretty, and I haven’t done anything with a lot of grey in it like this, so it will be a nice change from ripples and granny stripes! Now I have the challenge of finding the right grey at my local yarn store; I went last week but didn’t have the mini skeins with me to compare the different greys. There were some that I liked but they were bulkier than I wanted, which made it even more frustrating. I guess I’ll have to try again after work on Thursday and ask the person working there for some help.